View source
watch 01:54
Arcane: League of Legends - The Loop
Do you like this video?
Play Sound

Trolls are strong creatures found in Black Forests. They have very high health and damage, especially against ore deposits, rocks, structures and trees.

Trolls can spawn with a log as their main weapon - or they can be unarmed.

A Group of Mountain Troll roaming in forest

Mountain Troll preparing to smash a Viking in Deep Forest

Green Troll From the alpha (not green anymore)

Mountain Troll from the alpha (not in the game anymore)

Green Troll From the alpha (not green anymore)

Mountain Troll from the alpha (not in the game anymore)

Troll who has become stuck in a defensive ditch.

Infuriated 2-star troll unable to touch player at the bottom of a 7-meter ditch. The troll died.

Dying troll explodes in a cloud of pink vapor. 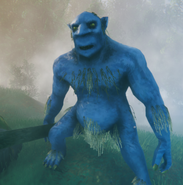 Infuriated troll lashing out at enemies in swamp (new model) 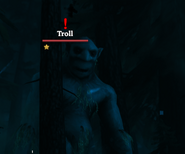