Rancid remains is a hostile creature found in Valheim.

They appear as a slightly larger than normal Skeleton, tinged greenish and generally holding a glowing green weapon. Most notably, they are located in Burial Chambers, a structure found in the Black Forest and very rarely the Meadows. They inflict Poison upon hitting. At least one usually spawns during the Skeleton Surprise event.

They cannot spawn naturally as a 1 or 2 star variant. The information below about those variants is accurate when spawning via console commands. 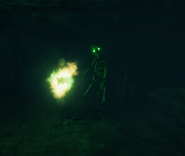 Add a photo to this gallery
Retrieved from "https://valheim.fandom.com/wiki/Rancid_remains?oldid=16396"
Community content is available under CC-BY-SA unless otherwise noted.