The Mountain is a biome which features frozen snow covered peaks framed with fir trees. This frozen and unforgiving region is home to Wolves and others sons of Fenrir. Drakes, the offspring of Moder, can be found in the skies making their nests at its peaks where they lay their Dragon eggs. Beware shifting piles of stone, they might be more alive than you think, stirring the resting Stone Golem.

Mountains can also contain Frost Caves, which are a dungeon home to Cultists and their pet Ulv. Bats also make their home here and can startle unsuspecting Vikings. Crystals can be found growing naturally on the walls and occassionally contain a large underground lake. 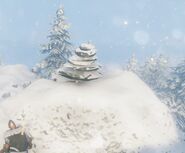