Lox are aggressive creatures found in Plains. They are an enlarged fusion of both a lizard and an ox, with shaggy brown hair and reptilian skin. Lox can be tamed which allows them to be bred and ridden.

Because Lox tend to stay in herds and wander back to the same location, it is possible to tame large groups of Lox even early in the game by periodically sprinting through the plains and scattering the cloudberries around places where the herds gather.

Once most or all of them are tame, Deathsquitos and Fulings will often attack them instead of the player. With a number of tame Lox, there will usually be one between the player and a new spawn. However, without adequate healing some of the lox are liable to eventually die if the area is active at night or during certain invasions.

This strategy saves you from having to build pens for the Lox, but the risk of death is high while scattering seeds. If your armor does not protect you from a Deathsquito attack, it may be ideal to leave everything in chests except cloudberries and flint spears. A rudimentary shelter with a portal in it can be used to safely enter the plains and to keep the area active while the lox are being tamed.

Tamed Lox can be utilized as a mount. First, create a Lox Saddle, then equip it to a Lox by assigning the saddle to a hot key and using it while close to the creature.

A ridden Lox is a very powerful companion. In addition to retaining their impressive health and damage resistances a sprinting Lox is faster then even the most high sprint-level players while also enjoying the benefit of not being slowed down by equipped armour. A ridden Lox also completely ignores a players carried weight, able to move and even sprint while the rider is over-encumbered.

A mounted Lox has 240 points of stamina which drain at approximately the same rate as a players while sprinting, however leveling the Riding skill both increases the speed of a ridden Lox as well as reducing the amount of stamina drained. It is important to note that a Lox's stamina regenerates much, much slower than a players, one point is regained roughly every 4 seconds while the creature has been recently fed, and one every 10 seconds while it is hungry.

While it is not currently possible to utilize a players weapons while riding (trying to do so results in the player instantly dismounting as soon as the attack key is pressed) a Lox at full sprint is capable of trampling most other creatures underfoot, dealing heavy damage when it comes into contact with them. 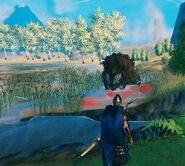 By the time it realized it had to go around the ditch, not over, it was full of arrows.

Tried to charge the ditch and smash it, but got stuck and died.