Leviathan is a creature found in Valheim.

Leviathans are extremely large, ocean dwelling creatures that appear as "living" islands. During night time, you can see its two eyes underwater. They are non-hostile, however they will submerge if their Abyssal barnacles are mined. Each hit on a barnacle has a 10% chance to trigger the Leviathan's retreat, signaled by a howl sound. Leviathan sinks after 20 seconds since the sound was played.

Leviathans are found in the Ocean.

Each one of a Leviathan's Abyssal barnacles have 40 Health and attacking any of them has a chance to trigger the submerge event even if the barnacle isn't fully destroyed. Try to keep your stamina high at all times and make sure you parked the boat with the ladder-side facing the the Leviathan, since if the Leviathan submerges while you are still on it, you will need to swim to your boat and climb into it in order to survive.

Leviathans themselves cannot be killed, however, their Abyssal barnacles can be mined for Chitin. 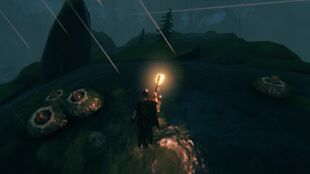 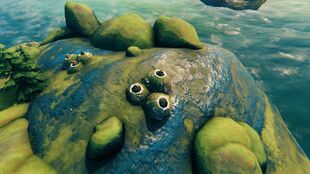 Leviathan at the edge of the world 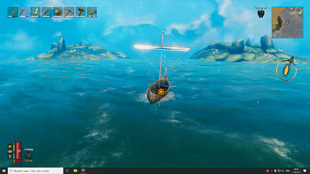 6 Leviathans in one location

Our first Leviathan sighting via Longship
Add a photo to this gallery
Retrieved from "https://valheim.fandom.com/wiki/Leviathan?oldid=16369"
Community content is available under CC-BY-SA unless otherwise noted.