View source
watch 02:23
Wiki Targeted (Games)
Do you like this video?
Play Sound

A Greydwarf shaman is a creature in Valheim.

The Greydwarf shaman is a hostile mob. In appearance it is slightly bigger than regular Greydwarf, but the main distinction is that its head supports deer-like horns and its eyes glow vivid green.

Can be found in the Black Forest biome, or in the Meadows at night after defeating the Elder.

Upon noticing player, it will attack player with a poison spray attack when in range and regular slashing attacks when up close. When the Shaman or any other Greydwarf is damaged, they uses their healing ability. This healing however, only activates when vivid green glowing "pollen" thrown into the air touches any Greydwarf, including themself. Once it touches any Greydwarf, it will regenerate rapidly. This can also heal Trolls in the vicinity.

Unlike the Greydwarf and Greyling, Shaman are not scared of fire and will not flee. They share this trait with the Greydwarf brute. Shamans take double damage from the poison status effect. 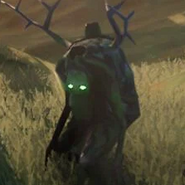 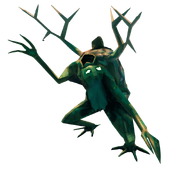 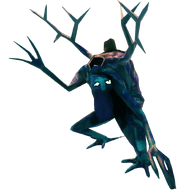