Ghost is a creature found in Valheim.

Ghosts are aggressive creatures that are sometimes found in Burial Chambers in Black Forests. They appear as a mass of formless, purple smoke and are allied with the skeletons also found in the Burial Chambers. While they can be parried, it is quite difficult to do so as their formless figure lacks visual cues for when they attack. They don't pose a major threat alone, but can be problematic when dealing with multiple enemies at once.

Ghosts currently only spawn within the Burial Chambers upon world creation and do not respawn anywhere when killed, making them the only mob in the game that can be hunted to extinction. They are also the only mobs that do not have any drops.

They cannot spawn naturally as a 1 or 2 star variant. 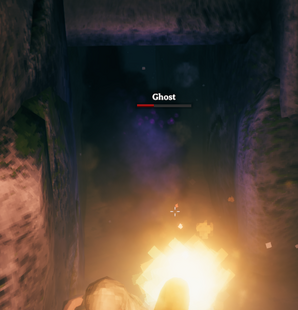 Add a photo to this gallery
Retrieved from "https://valheim.fandom.com/wiki/Ghost?oldid=16395"
Community content is available under CC-BY-SA unless otherwise noted.