View source
watch 03:01
Wiki Targeted (Games)
Do you like this video?
Play Sound

Deathsquito is a creature found in Valheim.

Deathsquitos are found in Plains biome.

Deathsquitos are small, aggressive, fast flying insects of bright orange color. They give off a loud buzzing noise at all times.

They are hostile to players and non-Plains creatures. After flying next to their target, they attack in melee range with very little delay, after which they will fly away and circle their target for several seconds before attacking again.

They cannot spawn naturally as a 1 or 2 star variant. The information below about those variants is accurate when spawning via console commands.

Players that haven't conquered the Mountain biome may want to avoid the Plains. Entering the Plains early to hunt Lox for their meat may be desirable, but an encounter with a Deathsquito is inevitable and a poorly equipped player will have trouble surviving without a good strategy.

Deathsquitos only have 10 HP and die relatively easy. The main problem to overcome is their almost unavoidable attack that deals up to 90 damage, which will stagger players with too little health or players that attempted to block without having enough block power.

If the player has over 90 block power then dealing with Deathsquito's becomes trivial, as blocking and counter attacking will kill them easily without the player taking damage. Parrying with a Bronze Buckler or better will have enough block power, but they are immune to stagger and parrying knocks them back a little which can make it more difficult to land a counter attack before they fly away.

Using a bow can be very effective. Players can kill Deathsquitos in one shot from an early level. They can be sniped from a distance, or if they are already attacking the player, a fully drawn bow can kill a Deathsquito accurately just before they get close enough.

With good timing with a melee weapon, they can be killed without taking any damage if the player strikes them during their "swoop". 2-handed maces such as Stagbreaker are the most forgiving on timing due to their effective range, but some practice may be needed due to the swing delay.

Simply having enough health and armor means that a player will not stagger from a Deathsquito attack, allowing a counterattack at the cost of lost health.

Deathsquitos will always miss when they try to attack a player running away from them that has no movement speed penalties from weapons and armor. 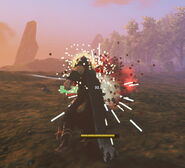 DEAD-squito! Pay attention, keep a weapon ready, and they're not much of a threat.
Русский
Community content is available under CC-BY-SA unless otherwise noted.
Advertisement