View source
watch 03:01
Wiki Targeted (Games)
Do you like this video?
Play Sound

Damage types are an important part of combat because of damage resistances and weaknesses:

Different enemies have different weaknesses and resistances so using the right weapon can make a big difference.

Status effects override natural resistances and resistance from gear. From example a player with Lox cape or a Lox entering water gets Wet Effect which replaces their Frost resistance. If there are multiple status effects, the last effect gets priority. Drinking Frost resistance mead after getting Wet will override the weakness.

Most weapons and enemies deal only single damage type. However some enemies and weapons (like Knives) deal multiple damage types in a single attack. In those cases the resistances are considered separately. 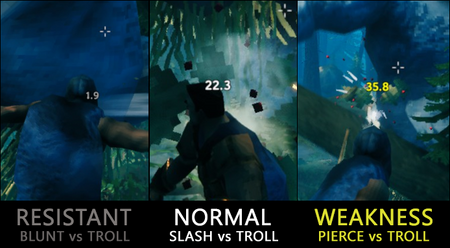 For mixed damage weapons, the color of the damage number is based on the highest raw damage listed. For example, Fire arrows will always show the color corresponding to the creature's resistance to piercing damage, because the combined piercing damage of the arrow and the Crude bow is higher than the arrow's listed fire damage.

Tick damage from damage over time effects are always shown as white.

Physical damage can be blocked and is reduced by armor.

Physical damage also causes Staggering which may cause the target to stagger.

Fire damage applies a Burning debuff instead of causing instant damage. The debuff lasts 5 seconds and ticks every second.

Fire damage stacks by adding the new damage to the remaining debuff damage, and then recalculating the tick damage..

Fire damage from physical attacks can be blocked. Fire damage is also reduced by armor.

For example, shooting a Fire arrow with 3x Sneak multiplier causes 66 Fire damage (13.2 per tick). After 3 ticks, 26.4 damage would be remaining. Hitting with a new fire arrow (22 Fire damage) would increase the total damage to 48.4 but reduce the tick damage to 9.7 per tick.

Poison damage applies a Poison debuff instead of causing instant damage. The debuff duration depends on the damage and ticks every second.

Poison damage doesn't stack. The previous debuff is replaced if its remaining damage is less than the new damage.

For example, taking 100 Poison damage with 50 armor causes 16 seconds of Poison with 3.1 damage per second. Drinking Poison resistance mead gives a 75% damage reduction for future sources (drinking won't affect poison that was already in effect). Then taking the same Poison damage would be ignored because it would only deal 3.1 damage over 4 seconds. After 10 seconds the poison has only 18.75 damage remaining. Taking 25 Poison damage without armor or resistance would now overwrite the previous poison debuff.

Spirit damage applies a Spirit debuff instead of causing instant damage. The debuff lasts 3 seconds and ticks every 0.5 seconds.

Spirit damage stacks by adding the new damage to the remaining debuff damage, and then recalculating the tick damage..

Some trees and ore deposits require a minimum tool tier for them to take damage.

Birch and Oak require a tool tier of 2. All other trees don't have a requirement.

Obsidian deposits and Silver Deposits require a tool tier of 2. All other deposits don't have a requirement.

Frost damage causes instant damage which can be blocked and is reduced by armor.

Frost damage also applies a Frost Effect debuff that reduces movement speed. Movement speed reduction starts at 0% and is gradually increased towards a 100% reduction. Refreshing the effect resets the reduction back to 0%.

The debuff duration depends on the amount of health lost:

For example, receiving 200 Frost damage while at max 150 health and wearing 50 armor causes 50 damage and 5 seconds of Frost Effect.

Lightning damage causes direct damage, can be blocked and is reduced by armor.

Lightning damage also causes a lingering visual effect, but it doesn't deal any damage over time.

Staggering causes the target to stagger if the total count of Staggering reaches a certain threshold. Creatures take double damage during a stagger. For most creatures, the threshold is 30% - 50% of their maximum health. Bosses and some enemies are immune to Staggering.

Staggering is passively reduced by 20% of the max value per second. Getting staggered doesn't reset the value.

Staggering effect doesn't stack. If the target is already staggered then a new stagger won't be triggered.

Staggering is caused by Physical and Lightning damage at a 1:1 ratio. However, some attacks cause extra Staggering:

For example, Troll has 600 health with 30% stagger limit (180 threshold). Using level 2 Bronze spear causes ~40 Staggering. 5 hits cause ~200 Staggering which causes the Troll to stagger and resets the Staggering. 3 hits during the stagger causes ~240 Staggering.

Pure damage ignores all defenses and can't be mitigated in any way.

For example, Wood wall is 2 meters high. Falling from top of 2 Wood walls deals no damage. After that each Wood wall causes 12.5 damage. With starting health of 25, falling from top of 4 Wood walls can be fatal. The actual damage taken varies because of terrain height differences and how characters collide with structures.

This table shows the damage multiplier for each damage type for each creature. This is from the perspective of the player, i.e. Lightning is not listed because the player cannot attack with it.

The default ordering of creatures is roughly in the intended biome progression and can be resorted back to this using the first column.