Damage in Valheim affects much of the core gameplay mechanics. Almost every entity, object, or structure utilizes this system in some way.

Below is a table for disambiguation. The Tenacity Tiers can be used as short hand to refer to these, if consistent wording or spacing is preferred. At the bottom of this page is a chart of creature Weaknesses,Resistances and Immunities. 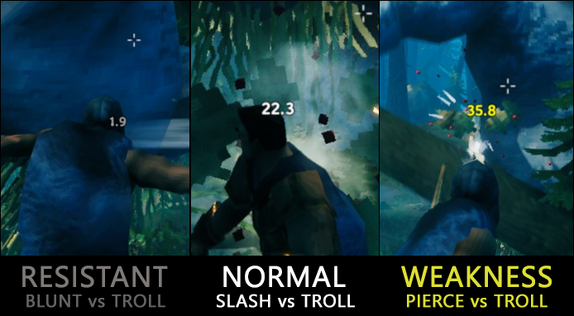 Fire damage applies a Burning debuff instead of causing instant damage. The debuff lasts 5 seconds and ticks every second. Fire damage stacks by adding the new damage to the remaining debuff damage, and then recalculating the tick damage.

Fire damage from physical attacks can be blocked. Fire damage is also reduced by armor. Fire damage that gets reduced to less than 1 won't cause Burning.

Poison damage applies a Poison debuff instead of causing instant damage. The debuff duration depends on the damage and ticks every second.

Poison damage doesn't stack. The previous debuff is replaced if its remaining damage is less than the new damage.

Spirit damage applies a Spirit debuff instead of causing instant damage. The debuff lasts 3 seconds and ticks every 0.5 seconds.

Spirit damage stacks by adding the new damage to the remaining debuff damage, and then recalculating the tick damage.

Frost damage causes instant damage which can be blocked and is reduced by armor.

Lightning damage causes direct damage which can be blocked and is reduced by armor.

Lightning damage also causes staggering and a lingering visual effect, but it doesn't deal any damage over time.

Some trees and ore deposits require a minimum tool tier for them to take damage.

Chop damage is used effectively against Trees[1] and Wood Structures[1]. Players and all creatures are Immune to this damage type. Listed below are all the sources of Chop Damage, and their Tiers.

Ancient Trees, Birch, and Oak require a tool tier of 2. All other trees don't have a requirement.

Pickaxe damage is used effectively against Rocks, Stone Deposits, Ore Deposits, and Stone Structures. Players and all creatures, with the exception of the Stone Golem, are immune to this damage type. Sources and tiers are listed in the table below.

Obsidian deposits and Silver Deposits require a tool tier of 2. All other deposits don't have a requirement.

Pure damage ignores all defenses and can't be mitigated in any way.

Caused by Burning, Poison and Spirit effects. The value of the tick damage is calculated when the source is applied.

Falling further than 4 meters, you take 6.25 Pure damage per meter; capped at 100 damage. For example; bearing in mind a wall is 2 meters high:

This table shows the damage multiplier for each damage type for each creature. This is from the perspective of the player, i.e. Lightning is not listed because the player cannot attack with it.

The default ordering of creatures is roughly in the intended biome progression and can be resorted back to this using the first column.